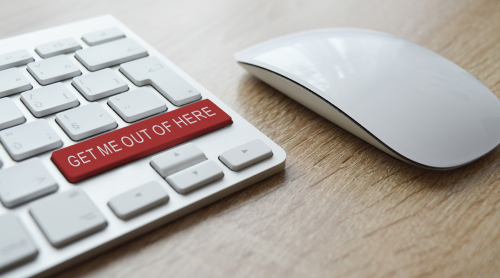 Sometimes the best way to learn a word is to learn the word’s story. Where has the word been? What was its original meaning and how was it used? This post will tell the story of the word prevaricate.

The verb prevaricate means “to speak or act evasively; to avoid telling the truth; to lie.” Although a prevaricating person might tell an outright lie, more often they’re dancing around the topic, saying or doing something to put off that moment when they must either absolutely lie or tell the truth.

The term entered English in 1582 as a backformation of prevarication, according to Chambers Dictionary of Etymology. English speakers may have been influenced by the Latin praevāricāri, which Online Etymology Dictionary defines as “to make a sham accusation, deviate.” Prevaricate picked up its modern meaning of “to speak evasively” in John Donne’s Selections (which publish prior to 1631).

Perhaps because of this idea of evasiveness, prevaricate is sometimes confused with procrastinate. The latter term, meaning “to put off doing something, especially from habit; delay,” entered English in 1588, says Chambers, and is a likely backformation of procrastination. It comes from the Latin prōcrāstināre, “to put off until tomorrow; defer.”

Garner’s Modern English Usage puts the error of using prevaricate for procrastinate at stage 1, which is “a new form emerges as an innovation (or a dialectal form persists) among a small minority of the language community, perhaps displacing a traditional usage.” Scanning several databases, I found examples that used prevaricate in its accepted sense:

But when asked to tell the military if Taliban pass through, they prevaricate. “They tell us, ‘The Taliban will kill us if we do,’” he said. “They are not fence-sitters, these people,” Captain Reed said. —The New York Times (2010)

Interestingly, The Oxford English Dictionary lists “to procrastinate” as one definition of prevaricate, calling it the “usual sense.” It’s the only dictionary I checked of a dozen or so that gave such a definition. Avoid using prevaricate to mean procrastinate, as most English speakers will not understand that meaning.

What word do you want to know more about? Send it to me!