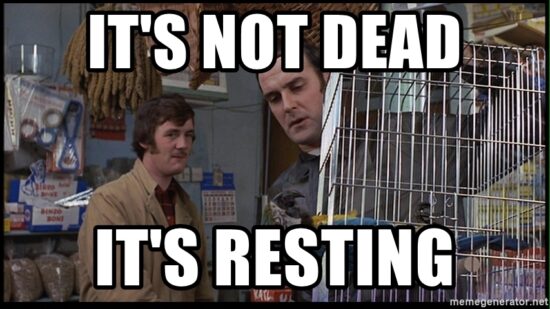 We’re advised to write briefly to keep our readers’ attention in this 280-character world. As copyeditors, we’re directed to cut the deadwood. In editing, “deadwood” is a word or phrase that doesn’t add anything to the sentence.

The trick, of course, is telling when something is truly dead and not merely resting.

Take in order to. Is it really deadwood?

Many usage experts think so, declaring the infinitive is fine on its own. Garner’s Modern English Usage notes that the phrase is wordy but useful when there is another infinitive already in the sentence. So while in order should be deleted from “In order to control class sizes, the district will also place seven portable classrooms at the four schools,” it could be kept in “The controversy illustrates how the forces of political correctness pressure government to grow in size and arbitrariness in order to pursue a peculiar compassion mission” because there’s already an infinitive in the sentence.

Yet there’s a flaw in that thinking.

Just because a sentence has more than one infinitive doesn’t mean we have to dress one up, as this sentence from another entry in Garner’s demonstrates: “To be sure, a subtle or complicated thought may need to be clarified by a careful restatement.”

In order doesn’t add a little bit of life to an infinitive. It’s part of an idiom that means “for the purpose of” (The American Heritage Dictionary), and there are plenty of examples in which in order to needs to be right where it is.

Merriam-Webster’s Dictionary of English Usage points to two examples in particular that would be worse if we deleted in order:

The critic betrays an unconscious admiration … in the sublime images he is driven to in order to express the depths of his exasperation.

I dreamed last night that I had to pass a written examination in order to pass the inspection there.

Perhaps that explains why we stubbornly keep using in order to: we know that in some instances it has a purpose. A quick check in Google News returned 641 million instances of the phrase. The Corpus of Contemporary American English returned 91,458 instances (1990–2019), and Google Books returned 351 million.

Don’t reflexively hit the delete key on in order. Stop to decide whether you need just the infinitive or the idiom. Remember the idiom’s meaning, and then ask yourself:

Perhaps your sentence will be better off without in order. But chances are good, that in order to isn’t dead—it’s just resting.

A version of this article first published on Copyediting.com on February 12, 2013.

4 thoughts on “In Order to Trim the Deadwood”