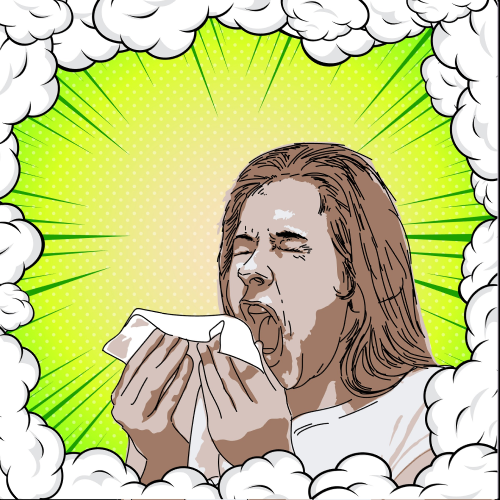 A while back, I struggled with a cold that left me empty of ideas for blog posts. When I asked the Twitterverse for ideas, 4ndyman suggested that I stick with my cold and look into the phrase “God bless you.” It proved to be a more daunting task than I anticipated, even once my head cleared.

God bless you has been said after someone sneezes since at least 77 CE, according to Snopes.com. Pope Gregory the Great later ordered the phrase used as the bubonic plague reached toward Rome (590 CE). It was thought that sneezing was a sign of the plague, and the hope was that God bless you would be a prayerful way to stave off the disease. It didn’t exactly work, but all the same, the saying became all but universal by 750 CE.

The word god entered English in 725 CE, but it reaches back as far as Proto-Indo-European. It either comes from ghut-, “that which is invoked” or ghu-to-, “poured,” from the root gheu-, “to pour, pour a libation,” according to Online Etymology Dictionary.

The idea of offering a blessing after a sneeze doesn’t seem to have originated with Christianity. According to An Uncommon History of Common Things, ancient Romans said “Jupiter preserve you,” and the ancient Greeks had similar customs, says Online Etymology Dictionary.

Also popular in the US, as well as in many other countries, is the German gesundheit, meaning “good health.” The Oxford English Dictionary has a first record in English in 1914, but it was probably in use for a century before that by the Pennsylvania Dutch, says An Uncommon History.

There’s seems to be no good answer, although Snopes.com lists quite a few theories, including:

Whatever the reason, An Uncommon History points out that most North Americans say “God bless” out of social obligation rather that religious belief, just as the sneezer obligingly responds, “Thank you.”

One thoughts on “Blessings and Well Wishes”