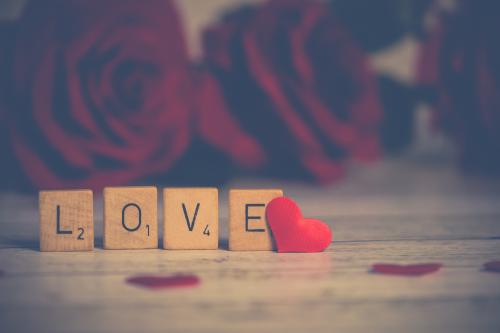 I was once taken to task for writing the following in a blog post:

That’s one thing with pet peeves: they’re our pets. We’re enamored with them.

Do you see the problem?

My critic claimed that the phrase is enamored of, not enamored with. Enamored, however, is an example of a word that dances with more than one partner. Of is the most popular, but it’s not the only one.

Enamor means “to inspire with love; captivate,” according to The American Heritage Dictionary, and is usually used in the passive voice. The Oxford English Dictionary dates it to 1303, and, interestingly, the first recorded examples of enamor pair it with on and upon.

Enamored likes to switch its prepositional dance partners. It’s danced with on, upon, of, with, and even by. On and upon it now shuns. Of became a favorite by 1600 and has remained so. But enamored often waltzes with with, to the shock of a few. It even sambas with by, but rarely enough that many people consider that dance uncouth.

Few language reference works address the problem of enamored‘s partners. Some dictionaries list only of, never mind evidence to the contrary, while others acknowledge with. None I searched even mention by.

Usage guides aren’t much more enlightening. Merriam-Webster’s Dictionary of English Usage briefly notes that of is the most common partner, followed by with and, less often, by. Garner’s Modern English Usage takes the hard line, declaring enamored is to dance only with of. However, the guide is forced to note that enamored with is at stage 4 of its Language-Change Index: “the form becomes virtually universal but is opposed on cogent grounds by a few linguistic stalwarts.” Garner may want to do away with the with usage, but he can’t ignore its longevity or popularity.

With isn’t a new partner, though. The OED‘s first recorded usage is Milton’s Paradise Regain’d in 1671: “Should she … Descend with all her winning charms begirt To enamour.” The dictionary doesn’t list an example that uses by, but its sibling, Lexico, lists one. Google Books has a rare instance of enamored by dating to 1800.

This Google Ngram shows that enamored with has become more popular in books over time, particularly in the last 50 years. However, enamored of is still used more often and enamored by hardly used:

Enamored with and enamored by are standard English. They aren’t labeled “nonstandard” or even “informal” in dictionaries that list them. They’ve been around, they’ve been consistently used, and at least enamored with is being used more frequently. The Ngram shows the gap closing between of and with usage.

Although that gap may be closing partially because there is more casual writing being published, and because casual language is starting to favor enamored with, that’s not the whole story. The Corpus of Contemporary American English shows that academic writing — some of our most formal writing — contains a fair amount of enamored with instances (29) compared to the number of enamored of instances (84).

Should you correct those who use enamored with or enamored by? No. But if you’re enamored of the of version, use it to your heart’s content. It’s not going anywhere.

A version of this article was originally published on July  12, 2012, on Visual Thesaurus.

2 thoughts on “The Many Dance Partners of “Enamored””