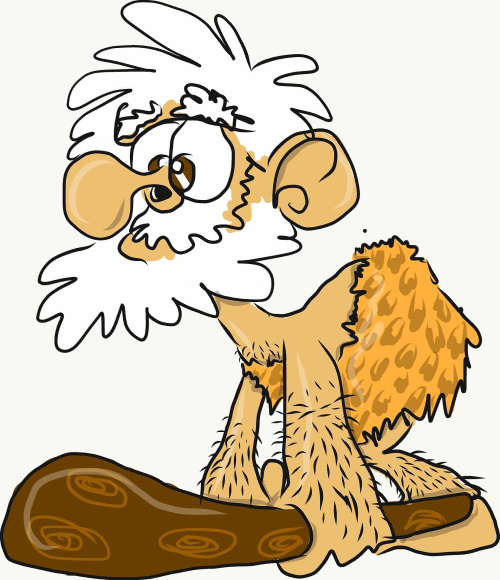 This week’s word story is perfect for writers looking for a synonym for club that isn’t overused.

Bludgeon can be a noun or a verb. As a noun it means “a heavy, short club that is thicker at one end or is weighted at one end.” Think of the clichéd caveman’s club, and you’ve got the right idea.

As a verb, bludgeon means “to hit someone or something with or as with a heavy club.” As in:

A man who tried to bludgeon his neighbour to death with a claw hammer has been jailed for 18 years. —Essex Echo (2011)

The noun form appeared first, in 1730, in Dictioarium Britannicum by Nathan Bailey. It seems we don’t know where Bailey picked it up. The Oxford English Dictionary gives us the reference: “Bludgeon, an oaken stick or club.”

The verb form came later, in 1868. By 1888, says Chambers Etymology, a figurative sense appeared: “to bully or threaten.”

Unfortunately, no one knows where bludgeon came from. A couple of other words have the same -udgeon stem and are also of unknown origin: curmudgeon, “someone who is cranky, stubborn, resentful,” and dudgeon, which Michael Quinion of World Wide Words defines as “a state of anger, resentment, or offence.”

Are they all from the same source? It could be. Perhaps a curmudgeon in a dudgeon would use a bludgeon to quell their anger.

Bludgeon’s popularity is less than it was in the early 1800s, but it seems to be on the rise again. A search in the Corpus of Contemporary American English produces 330 hits (among 1 billion words), up from 124 hits (among 424 million words) several years ago.

This Ngram shows that bludgeon is also appearing more often recently in books:

But I like bludgeon. It’s got that sonicky quality that Roy Blount writes about. It starts with a small effort (bl-), as when one raises a bludgeon. Then it gets forceful in the middle (-dge-), when the impact of such a blow hits a person. It ends on a downbeat, with the -on almost getting swallowed up. Rather like being bludgeoned. After the initial impact, you probably aren’t aware if the club has been lifted for another blow or not.

How would you use bludgeon in your writing?