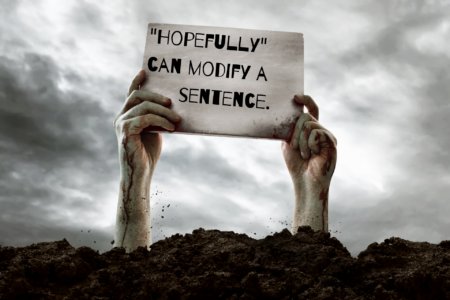 Zombie Rule: Don’t Use Hopefully as a Sentence Adverb.

An adverb modifies verbs. But it can also modify adjectives, other adverbs — and sentences.

Truthfully, I didn’t study for the exam.

Yet a zombie rule has risen up, disallowing hopefully as a sentence adverb, as in:

Hopefully, I passed the exam anyway.

English speakers and writers embraced hopefully as a sentence adverb rather quickly (at least as far language changes are concerned), and when that happens, defenders of the language will rise up.

Those defenders declared that hopefully could only mean “in a manner full of hope” and not “it is to be hoped.” But it’s a funny thing about words and their meanings: if enough people use a word to mean something new, that definition can stick and become legitimate. Which is just what happened to hopefully.

Even the recalcitrant Associated Press Stylebook accepts hopefully as a sentence adverb. Hopefully, you will too.

Hopefully can be used to modify an entire sentence.