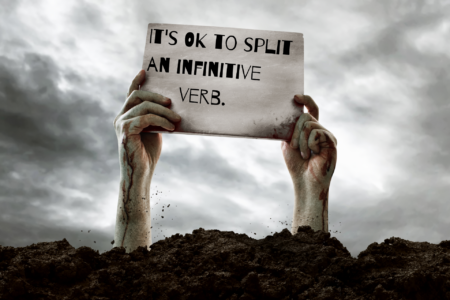 This is the zombie that dictates that you not separate the to from the infinitive form of a verb:

We should study grammar to understand writing better.

Together they are one verb, you see, and they shouldn’t be separated. End of discussion.

This zombie seems to have risen up when 18th-century grammarians tried to make English look more like Latin. Since Latin doesn’t split its infinitive verbs, neither should English. The trouble is that an infinitive verb is one word in Latin but two in English.

From this zombie came a related one: Don’t split verb phrases. Yet in English we position the modifier next to the term it modifies:

We should study grammar to better understand writing.

These days a lot of usage experts will tell you that it’s OK to split your verb but will then spend several paragraphs trying to convince you to avoid it whenever you can. You can safely ignore them. Or you can ignore them safely. Whichever produces the correct meaning and emphasis for your sentence.

Infinite verbs and verb phrases can be split. Position the modifier next to the term it modifies.

One thoughts on “Rewriting the Zombies: Split Infinitives”