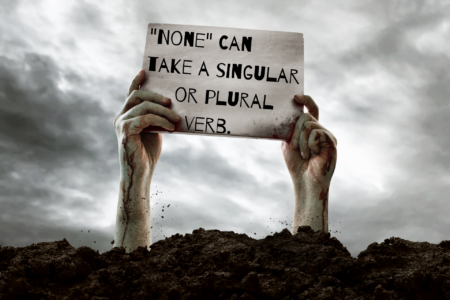 Zombie Rule: None Means “Not One” and Always Takes a Singular Verb.

Maybe this zombie is walking around out of habit, because commentators who support this rule are rare. Most spend their time denouncing it instead. Yet there are writers and editors who haven’t gotten the message.

It’s true that none means “not one,” but it also means “not any.” And though none descends from the Old English nan, “not one,” nan was used with both singular and plural verbs.

So much for etymology.

In modern usage, some commentators have tried to guide writers on how to choose between singular and plural usage. Some suggest that when none is paired with of, the verb agree with what follows the of. I suggested that myself in a past article:

But that’s not always what we do. Merriam-Webster’s Dictionary of English Usage (MWDEU) has collected many sentences that ignore such a rule, including these two by Edward P. Lanning in Peru Before the Incas (1967):

None of these sites has produced evidence of plant gathering.
None of the inland camps have yet been excavated.

None has been used as both singular and plural since Old English, with no discernible rule about when to use to choose one over the other.