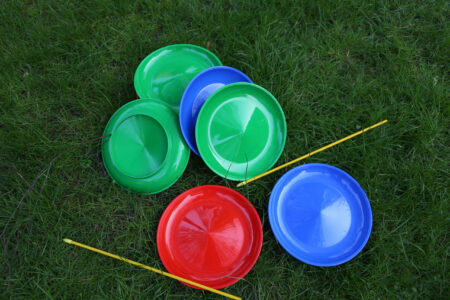 I had it all planned: I had a pile of writing and editing projects that needed to get done. I blocked the day off from meetings and appointments. I booted up my writing music playlist and planned to ignore social media, the phone, and email. I was going to have a Get Stuff Done Day.

The universe had other plans.

Sometimes, no matter how hard you fight it, your Get Stuff Done Day turns into a Spin Plates Day. Instead of working on tangible tasks—tasks that produce something you can show others, such as an edit—you work on intangible tasks that move projects along. It’s like that old trick of spinning plates on top of tall sticks: You get all the plates spinning and then rush back and forth, giving the wobbly ones some more power.

Team projects are like those plates. After the initial spinning, you have to check in on the project and keep things moving along: provide feedback, assign tasks, mark items off the list, add new items to the list, keep everyone informed, and so on. When you have a line of projects, several usually wobble at once. Ignore one, and you’ll have a broken plate at your feet.

Before my Get Stuff Done Day even got started, I had demands on my time. Projects that looked like they were spinning along were wobbly, threatening to fall if I didn’t give feedback or assign a task. Too, I had several urgent emails to respond to. Whether I resolved the problem or handed it to my assistant to resolve, I still had to spin that plate.

Back and forth I bounced, from one project to another, all the time worrying about when I could start those writing and editing projects.

Eventually, I realized that too many projects and too many people needed my attention for me to get any tangible work done. I reviewed due dates and scheduled new times for those projects. I got all the plates humming along.

Not every day is so nicely structured, with just one type of task to do. Most days, my task list consists of tangible tasks, like editing, and intangible ones, like invoicing, project management, and networking. Some days involve fighting fires, too—dealing with an emergency situation or a rush job. On Fight Fires Days, having plates crash to the floor is the better choice.

Personally, I feel more successful when a workday is full of one kind of task. Others might find doing a variety of tasks each day rewarding. Either way, it’s important to plan your time accordingly.

Remember in the 1990s when multitasking was seen as the best way to get your work done? Research has shown that multitasking is inefficient and results in poorer performance.

Few of us, though, can block off entire days to Get Stuff Done, Spin Plates, or Fight Fires. Deadlines are shortened, edits take longer than expected, everyone who needs your attention reaches out to you at once. In short, life happens.

We can take some control over our days, however, with time management and task management. In the follow-up, I’ll review some techniques you can use to regain control over your workday.

This article originally ran on Copyediting.com on January 8, 2016.

One thoughts on “When Your Work Tasks Manage You”