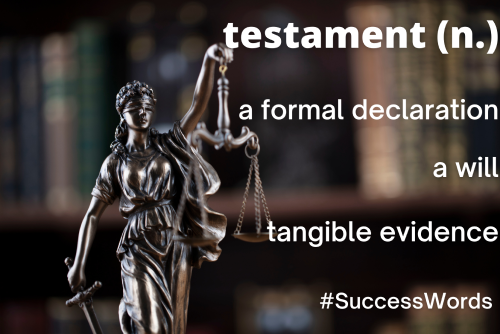 Testimony and testament are similar words that, for many writers, can be easy to confuse. There is a clear difference between them, however. Although both terms relate to evidence, testimony specifically refers to evidence from a witness, while testament is “tangible proof or evidence,” according to American Heritage Dictionary. The terms share a common, if distant, root that reveals their relationship.

Testimony entered English before 1382, referring to the Ten Commandments, as used in the Wycliffe Bible. It wasn’t until about 1425, says Chambers, that testimony picked up its legal meaning from a borrowing of the Old French testimonie and the Latin testimōnium, both meaning “evidence, proof.” Now, watch what happens when we pull apart testimony’s Latin ancestor.

Testimōnium, says Online Etymology, is from testis, “witness” and -monium, a suffix that means an “action, state, condition.” That testi- that is hiding in both in testament and testimony ultimately comes from the Proto-Indo-European (PIE) *tris- for “three,” as in the third party who gives witness, according to American Heritage Dictionary.

From three to witness to evidence, it’s all relative.

This article originally appeared on Copyediting.com.

2 thoughts on “Testament vs. Testimony: It’s All Relative”