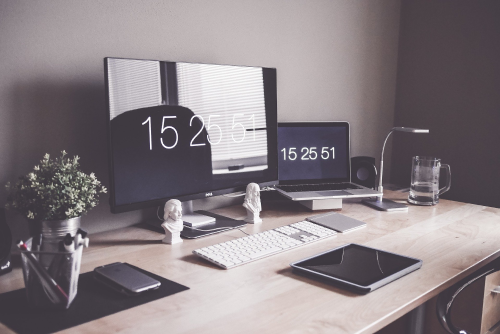 Let’s start with the basics: parts of speech and function. Here are our sentences:

Parts of speech seem simple enough. She is a pronoun, is is a verb, very is an adverb, well can be an adjective or an adverb, and organized, educated, and trained are all verbs.

Function is a little more complicated. She is the subject of the sentence. Is is either the main verb or an auxiliary verb for the main verb. Very modifies either well or one of the verbs (organized, educated, trained). Well modifies one of the verbs, making it an adverb. Organized, educated, and trained are either past-participle verbs or past-participle adjectives.

Here’s the tricky bit: very is a degree adverb. It can modify adjectives but not verbs. The Cambridge Grammar of the English Language offers these examples:

He was very frightened.
*The plants were very watered by the gardener.
It was very enjoyable.
*We very enjoyed it.

The question, then, is are organized, educated, and trained past-participle verbs or past-participle adjectives or are they ambiguous? If they are verbs, very can’t modify them. To fix the problem, we can add well so that very modifies well and well modifies the verbs. If organized, educated, and trained are adjectives, we can use very on its own.

The Cambridge Grammar outlines three tests for determining whether we have verbs or adjectives in our sentences. First, if organized, educated, and trained are able to be modified by very, they are acting as adjectives:

Only the third sentence sounds odd to my ear. I searched the Corpus of Contemporary American English (COCA), which lists 1 billion words from 1990 through 2019, for examples. Here’s what I found:

It seems writers overwhelmingly prefer to use trained as a verb rather than an adjective. The presence of very well organized and very well educated may indicate that organized and educated are used either as verbs or as adjectives. This appears to answer our question, but let’s see what happens in the other two tests.

In the second test, if we can change the form of to be (is) to seem, look, or remain, then our terms are adjectives:

This time only the first sentence sounds right to my ear. How can one lose education or training? Once learned, knowledge stays with you. You can forget it, but that’s a different process, I think.

Although not all adjectives have a negative sense, in all three sentences, we clearly get negative meanings of the root words rather than a reversal of the action.

From all of this, we see that very organized passes all three tests so is clearly grammatical. Very educated passes two of the tests; it’s somewhat ambiguous whether very educated acts as a verb or an adjective. This is reflected in my COCA findings, where very educated occurs more often than very well educated.

I was surprised that very trained passed even one test. It sounds wrong to me, and there were only a few outlier results for it in COCA. It seems to be acting as a verb, thus requiring well with very to modify it:

She is very well trained.
She is trained very well.

Send me your grammar and usage questions, and I’ll hunt down an answer for you.