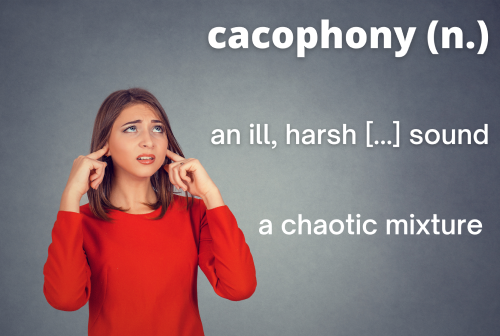 A cacophony is “a collection of loud, harsh sounds heard all at once.” It’s disharmony. Discord. Dissonance. Noise.

Chambers Dictionary of Etymology notes that cacophony entered English in 1656, and Online Etymology Dictionary and The Oxford English Dictionary largely concur (it’s great when we can all get along, isn’t it?). It comes to us from the Greek kakóphōnos, meaning “ill-sounding,” and it might have been influenced by the French cacophonie.

Two of the first printed uses of cacophony, as recorded by The OED, are:

Cacophony, an ill, harsh, or unpleasing sound, (in words) a vitious utterance or pronunciation. —Glossographia (1656)

Alter rhymes, and grammar, and triplets, and cacophonies of all kinds. —Alexander Pope in a letter to Jonathan Swift (1733)

Glossographia was written by one Thomas Blount. Interestingly Blount’s descendent, Roy Blount Jr., has written a couple of his own glossaries, Alphabet Juice and Alphabetter Juice. In Alphabet Juice, he introduces the idea of sonicky:

The quality of a word whose sound doesn’t imitate sound, like boom or poof, but does somehow sensuously evoke the essence of the word: queasy or rickety or zest or sluggish or vim.

I’d vote cacophony a sonicky word. Those c sounds are hard on the ears and are emphasized by their proximity to each other. Loud, harsh sounds, indeed.

The Corpus of Contemporary American English shows that today, we use cacophony as we always have, in relation to voices, language, music, and general background noise.

You are creating a cacophony in which it is impossible to hear your own voice, whether it’s yourself you’re thinking about or anything else. —American Scholar (Spring 2010)

Through a small speaker emerges the symphonic cacophony I couldn’t hear when I was in the water: a rain-forest chatter of squeaks, clicks and trills. —Popular Mechanics (February 2011)

We may be using cacophony the way we always have, but we’re using it more often.

Maybe its popularity is growing because our mechanized world is so loud, or maybe it’s because of all the noise we’re making online. Either way, despite its age, cacophony strikes me as a very apt term for the digital world.

What word do you want to know more about? Email it to me!