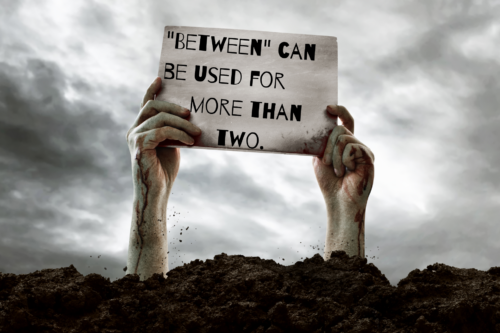 Zombie Rule: Never Use Between for More Than Two Items.

You should never use between to refer to more than two things, says this zombie. Break the word down into its component parts and you get bi-, meaning “by,” and tweonum, meaning “two each.” So of course between must only be used for two!

Between does show a one-to-one relationship, but it can involve as many items as necessary:

Between you, me, and the lamppost, I think he’s full of himself.

Among shows a different relationship, one in which there is no one-to-one connection. It traces back to an Old English phrase, on gemang, meaning “in a crowd.”

Among the deceased’s effects were a gold watch, several credit cards, and a set of keys.

The best explanation was made over 100 years ago by The Oxford English Dictionary‘s first editor, James A. H. Murray:

[Between] is still the only word available to express the relation of a thing to many surrounding things severally and individually; among expresses a relation to them collectively and vaguely.

Nothing’s changed since Murray’s time. Between and among still have different meanings, and we still have a difficult time applying them correctly. Forget the idea of two versus more than two. Think relationships instead:

For a one-to-one relationship, no matter how many items are involved, use between; for a crowd, use among.

A version of this article originally published on June 10, 2013, on Visual Thesaurus.