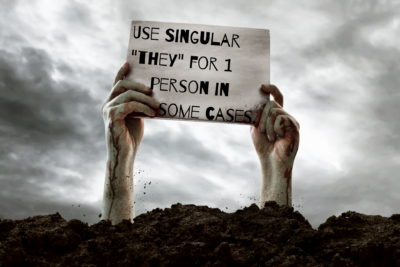 Zombie Rule: Don’t Use They for a Singular Person.

They and its related forms, their and them, have long been used to refer to one person of an unknown gender:

Each student should bring their book to class every day.

But like the other rules in this series, suddenly the usage, often referred as singular they, became popular. Defenders of the language cringed and cried, “This we will not accept! A writer should know his grammar better!”

Why do people have such a hard time with they being used in the singular? They don’t have a hard time with you being both singular and plural. They, their, and them have been used regularly for singular nouns as far back as 1523. And with the social pressure not to use he, his, and him for all singular nouns, male or female, singular they is gaining more usage and attention.

As with split infinitives, usage experts are slowly coming around to the idea that singular they is grammatical. Yet they will spill lots of ink to convince you not to use it. A writer should feel free to ignore them and use singular they if they desire and if it works in their sentence.

Remember to use a plural verb with this plural pronoun. You can also choose to recast the sentence.