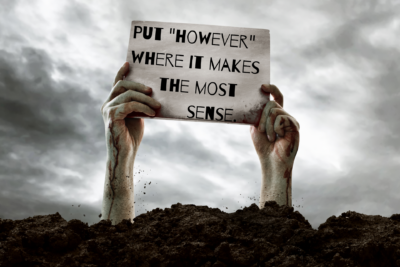 Zombie Rule: Don’t Start a Sentence with However.

The however zombie rule has many followers, but fortunately it has just as many detractors. Merriam-Webster’s Dictionary of English Usage notes that Strunk and White put forth this rule, and many followed, but the opinion is older and its beginning is uncertain.

The argument is that when however begins the sentence, it means “to whatever extent” rather than the perhaps desired “on the other hand.”

Say it with me, now: poppycock.

Position in the sentence doesn’t change however from one meaning to another. Context does that:

However remote the possibility that you’ll win, you should enter the poetry contest.
However, be sure to send only your best poetry.

Theodore Bernstein chimes in on the argument in The Careful Writer:

When the word “however” is properly placed in a sentence it throws contrasting emphasis on what precedes it. … The governing consideration should always be simply this: Which ideas are to be contrasted?

In our first example sentence, however introduces an idea (the remote possibility that you’ll win) that contrasts with the idea that follows it (you should enter the contest). We could as easily write:

You should enter the poetry contest, however remote the possibility that you’ll win.

The choice is simply what sounds better to your ear.

In our second example, however introduces a contrasting idea. While you can position however in a couple places in the sentence, it will have the greatest impact between the two ideas being contrasted, in this case at the beginning of the sentence:

Place however where it makes the most sense in the sentence.