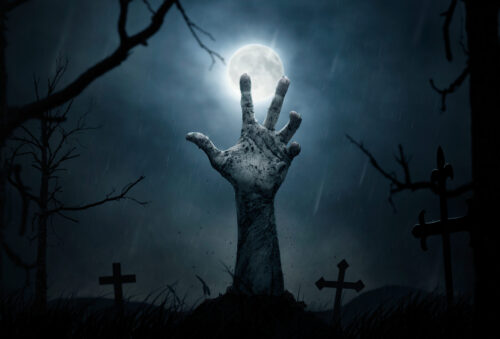 Never end a sentence with a preposition.

Most of us are familiar with the above grammar rules and many more besides. They’re presented to us as hard-and-fast, dyed-in-the-wool rules. Many of them start with don’t and are meant to guide you toward “correct” English.

The problem is that they’re not grammar rules at all. They’re stylistic rules disguised as grammar rules—and not all of them have a good style.

In 2005, Arnold Zwicky introduced the term zombie rule to describe a grammar rule that isn’t really a rule. Zombie rules are taught, followed, and passed along as rules we must follow to speak and write correctly.

Like their namesakes, however, these rules are dead and no matter how many times it’s explained that there is no grammatical basis for them, they just keep coming back.

How do we get such rules? Sometimes well-meaning people, such as our beloved elementary school teachers, pass along a narrow grammar rule or a stylistic guideline as a broad rule and ruthlessly enforce it. Our moldable young minds form around this rule and fix it forever.

Other times, people want to “improve” English and force a rule upon the language. Eighteenth-century grammarians had a big case of “English is rubbish unless it looks like Latin” and created plenty of rules for English. Those rules got repeated, generation after generation, with little thought to the reasoning or source. Then our beloved elementary school teachers picked them up, and, well, you can see where that got us.

The improvements generally limit the way we naturally use English, forcing us into an unnecessary and awkward straitjacket.

And then you have people who don’t understand the difference between grammar and style. With the former, there is a right and wrong. You would not say I are going, after all.

In this new series, I’ll review several zombie rules that you might have been unwittingly taught and arm you to kill those zombies for good. Think of it not so much as getting rid of beloved rules but freeing your writing from unnecessary burdens.

A version of this article was originally published on June 10, 2013, at Visual Thesaurus.

16 thoughts on “Rewriting the Zombies: What’s a Zombie Rule?”